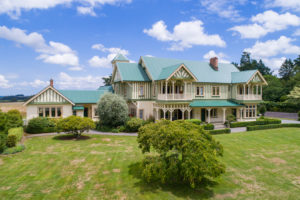 Built in 1906 for William Marshall, and is a fine example of Natusch's work in the English domestic revival style. The house is set in mature and attractive grounds with beautiful views of the Rangitikei.

Maungaraupi Homestead, built in 1906, is an important example of the work of Charles Tilliard Natusch (1859-1952), an English-born architect who settled in New Zealand in 1886 and established an architectural practice in the 1890s. The land on which the homestead stands was acquired by the noted naturalist William Swainson (1789-1855) and later by his son-in-law Major John Williams Marshall (1814-1891) of the 65th Regiment. Maungaraupi Homestead was built for Marshall's son from his first marriage, William Swainson Marshall (d.1926). William had inherited his grandfather's passion for natural history and ethnology and was a foundation member of the Polynesian Society (est. 1892), one of the oldest learned societies in the Southern Hemisphere. In 1892 he married Elizabeth Hilda Swainson, the second daughter of William Swainson of Te Rakehou, Fielding.

The homestead was built by James McChesney of Marton and designed in the Tudor style favoured by Natusch and fashionable in the early decades of the 20th century. The building's exterior features the half-timbering typical of the style. Inside are rimu floors, walls, doors and panelled ceilings. Maungaraupi remained in the family until the 1980s, first as a family home and later as a guesthouse. Today it is a private dwelling and function centre with accommodation.

Maungaraupi is a fine example of the work of one of New Zealand's better-known domestic architects, Charles Natusch. The homestead is noted for its fine workmanship and the detailing evident in the interior. It is historically significant for its links to the Swainson family and John Williams Marshall.

Charles Tilleard Natusch (1859-1951) completed his architectural studies in England in 1882, after which he travelled in the United States and Canada. He returned to England in 1883 to become involved in the town planning and development of Southend-on-Sea. He immigrated to New Zealand in 1886 and after a short collaboration with Atkins & Clere, established a practice in Wellington as an architect and quantity surveyor. He then moved to Masterton, Pahiatua and finally to Napier, where he bought the architectural practice of Robert Lamb. From 1908 Natusch worked with his three sons, Aleck, Rene and Stanley. The firm received many domestic commissions from the farming community. Its well known houses include Bushy Park (Kai Iwi), Gwavas (Tikokino), Matapiro (Napier), Maungaraupi (Marton) and Wharerata (Massey University). Following several changes of name and three generations of Natusch architects, the family practice continues today as Natusch Partnership in Napier.

A two storey house of 836 square meters with a single storey service wing attached to the southern side. The ground floor exterior is weatherboarded and the upper storey half-timbered. The latter incorporates gabled balconies jettied out over the ground floor. There is a water tower built into the north western corner of the house. Inside there is a beautifully panelled staircase hall. Other main rooms include the dining room, drawing room, smoking room, former school room and entrance hall with inglenook.

A stay at Maugaraupi Homestead allows you a unique opportunity to literally live in history, as you are transported back 120 years, to the world of early pioneering settlers.

Inside the homestead, although losing its memorabilla guests can have a tour of the homestead and tower  and share in the fascinating homes history; outside, the beautiful gardens and grounds are yours to roam.

Explore our historic woolshed. Soak up the peaceful country atmosphere, relax in the majestic garden beneath 130 year old trees, or wander the farm and feed the animals. Enjoy a country cooked breakfast. We are happy to provide dinner – please request this when you book.

Maungaraupi gives you peace and tranquillity, is located heart of the Rangitikei, in close proximity to Marton, Hunterville and Bulls.  The area offers in the centre of a huge range of pursuits – river fishing, canoeing and swimming, bush and farm walks, horse-riding, garden visits, antiques, crafts, historic places.

less than 10 minutes to town and restaurants, yet is located 1 km off the road in quiet countryside. What better place then to celebrate a wedding, commemorate a significant milestone, or launch a new direction for your business.

And with secluded outdoor areas, the Homestead offers plenty of options for open air events. Your hosts Rita Barbara and Graeme, can help you with marquee hire, sound systems and other requirements you may need.

For weddings, tour groups and larger functions, we call upon Creative Caterers who specialise in such events  and they  can supply catering to your event, or your caterers may use the facilities on site themselves.

For those wishing to stay longer, the Princess suite with a Queen sized bed is available, as well as two other rooms, one with twin beds, the other with a queen sized bed and adjoining ensuites.

We look forward to welcoming you  –